Using Python 3's function annotations, it is possible to specify the type of items contained within a homogeneous list (or other collection) for the purpose of type hinting in PyCharm and other IDEs?

A pseudo-python code example for a list of int:

I know it's possible using Docstring...

... but I prefer the annotation style if it's possible.

Answering my own question; the TLDR answer is Yes.

In September 2015, Python 3.5 was released with support for Type Hints and includes a new typing module. This allows for the specification of types contained within collections. As of November 2015, JetBrains PyCharm 5.0 fully supports Python 3.5 to include Type Hints as illustrated below. 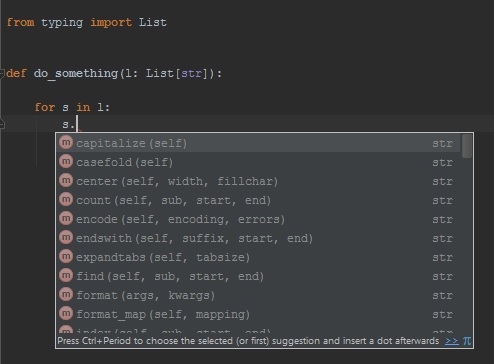 As of May 2015, PEP0484 (Type Hints) has been formally accepted. The draft implementation is also available at github under ambv/typehinting.

As of Aug 2014, I have confirmed that it is not possible to use Python 3 type annotations to specify types within collections (ex: a list of strings).

The use of formatted docstrings such as reStructuredText or Sphinx are viable alternatives and supported by various IDEs.

It also appears that Guido is mulling over the idea of extending type annotations in the spirit of mypy: http://mail.python.org/pipermail/python-ideas/2014-August/028618.html